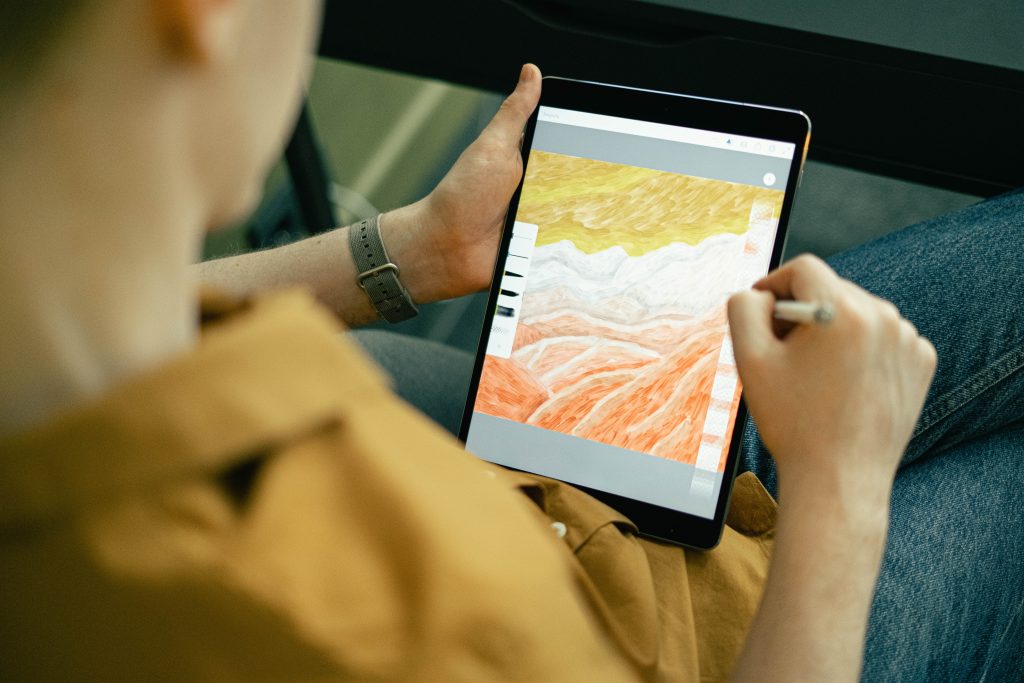 Digital art or digital art is a movement in art based on the use of computer technology. Authors of digital art willingly use computer programs and technology in the creative process, and the result are works in digital form.

The sphere of digital art is in constant development. The possibilities of constantly updating graphic editors inspire artists to create more and more unusual images. Therefore, the works of digital artists are difficult to classify. Selected types of visual digital art can be based on the technology used in its creation, although it is worth saying that many artists use a range of different digital tools, mixed techniques.

Digital painting is the creation of electronic images using computer imitations of traditional tools of the artist. There are different digital painting techniques, depending on the skill level of the artist. Beginners can create illustrations from a photograph, more experienced ones can create an illustration from a scanned drawing or create their artwork immediately on a computer or tablet.

The quality of digital painting depends not so much on the technique as on the skill of the artist, his knowledge of drawing, anatomy, color theory and composition. The technique only makes the process much easier:

It allows you to save the stages of work, cancel unsuccessful actions, freely change the proportions and composition, and work with color.

A photography technology that uses the conversion of light by a light-sensitive sensor to produce a digital file, used for further processing and printing. The principles of digital photography do not differ from analog (film) cameras. The three “pillars” on which photography rests: shutter speed (shutter speed), aperture, which creates exposure, and color temperature are equally important to conventional photographers as they are to digital photographers. That said, digital cameras have different automatic modes, including creative, built-in filters. Digital photos can easily be edited: basic or advanced color correction, retouching and other processing.

Vector graphics is an illustration, which is described during coding by mathematical formulas defining the object position, its shape, stroke and fill parameters. Vector images (sometimes called vector shapes or vector objects) consist of lines and curves defined by vectors – mathematical objects that describe the image according to its geometric characteristics.

Vector images can be freely moved and scaled without loss of detail and clarity because such images are resolution-independent.

Three-dimensional graphics and animation – the section of computer graphics, dedicated to methods for creating images or video by modeling three-dimensional objects in three dimensions. In this 3D model can be realistic, fictional or completely abstract. In virtual space, artists can create entire fantasy worlds in which the model can be viewed from all sides, with a high degree of detail can be elaborated textures, lighting, can be created animation of objects and dynamic simulation of particles.

Dynamic simulation is an automatic calculation of interactions of particles, bodies, etc. with the simulated gravitational, wind, pushing or other forces, as well as with each other.

The resulting three-dimensional models may be refined in other editors.

A fractal is a figure or structure which has the property of self-similarity, i.e. each larger element contains its smaller copy, and this can go on indefinitely. Crystals, snowflakes and many other natural objects have a fractal structure. Computer programs can build amazingly beautiful and complex fractal shapes.

Typography is the art of decorating with typesetting text, based on certain rules inherent in a particular language, through typesetting and layout. In digital design and art, oriented toward the connection of all forms of media, different ways of presenting information, typography is becoming one of the artistic tools, and often its external, formal characteristics are in the foreground. Designers create typographic posters and compositions, text comes alive in video clips and advertisements.

Photomanipulation is the combination of parts of different images and graphic elements in order to get a completely new work with its own meaning and purpose. Masters of photomanipulation embody their creative ideas by combining different, usually high quality stock photographs, into a single coherent artistic image.

Modern graphic editors allow you to create amazing combinations of the most different visual images, transforming photos into surrealistic paintings, stylish design compositions that can embody the most complex concepts or fantasies.

There are many varieties of photo-based compositions: collages and photo art, posters and designs.

Quality photo art is not just “gluing” pieces of different pictures together in a Photoshop graphic editor. It includes the processing of all fragments of images in a single color scheme, tone correction, taking into account the position of light sources and the direction of shadows, it is almost impossible to separate the original photos.

Before computers were generally available, motion graphics were expensive and time-consuming, which limited their use in high-budget film and television. The term “motion graphics” is related to the growing popularity of computer applications like Adobe After Effects, Maya, and Autodesk 3D Studio Max. These programs combine the special effects of video processing, sets of tools for color correction, text animation, camera movement and create multi-layered compositions.

This is the promotional material for the Secureworks rebranding campaign. In total, the authors have prepared a complete package: a full CG video based on complex 3D-particles.

Computer animation is a type of animation created with the help of a computer. The artist creates drawings on the screen the initial and final position of the moving objects, and the role of the phase takes over the computer, counting all the intermediate states, based on mathematical characteristics. The resulting drawings, displayed sequentially on the screen with a certain frequency, create the illusion of movement.

Computer animation is widely used in the field of entertainment, as well as in industrial, scientific and business spheres. As a derivative of computer graphics, animation inherits the same ways of creating images.