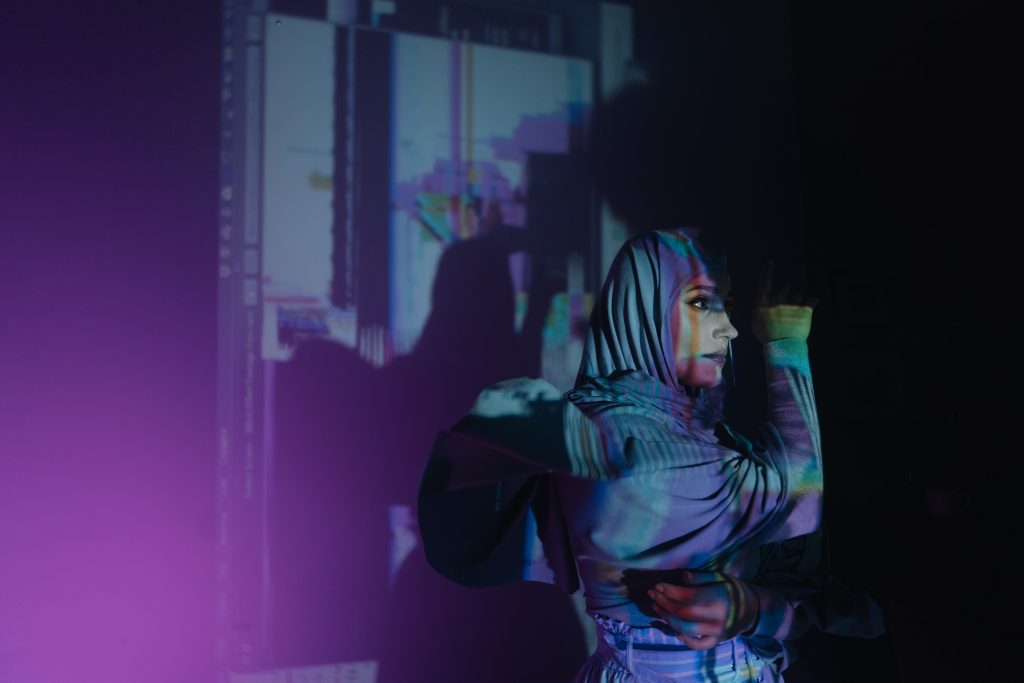 Animations, drawings and entire labyrinths made with just light beams magnetically catch the eyes of viewers. More and more modern artists and designers use light as a modern art tool. To lift the veil of secrecy on the creation of performances and installations with light equipment, we decided to write this article.

It is almost unthinkable to imagine modern installations without sound accompaniment. It is the characteristic music that creates the mood, which in combination with the visuals fills the viewer completely. Atmospheric abstract music or rhythmic electronic – no matter the theme of your event, in any case, lighting devices must work in harmony with the musical rhythm. To this end, was created function sound activation, which you will find in many “intelligent” light fixtures. These projectors, rotary light heads and color-music installations. Laser projectors are most often used to create installations with lighting equipment.

Lasers of the latest generation have a full programming capability. Special software from the manufacturer allows the user to use a PC to create scenarios that are the basis for three-dimensional realistic laser projections and animations. You can also buy third-party software, which can provide new features. You can bring to life any images, drawings, inscriptions, or abstract projections, which are so popular in contemporary art. The power of light equipment for installations is enough even to project directly into the night sky or on the walls of buildings. If the basics of projector programming is too complicated for you yet, you can easily choose from the built-in library of the device already ready and suitable lighting scenarios.

If your installation emphasizes the play of beams in the space and not the projection itself on the surface, it has to create a light haze in the room. An artificial fog generator will maintain a slightly less transparent environment in which the laser beams become bright and almost palpable. This effect will be appropriate in outdoor areas as well. Installation can also be done by simple means – non-programmable disco lasers. Their static beams in the fog-filled space form laser corridors and mazes, which look fantastic, and require less spending on lighting equipment for installations. A great addition to any installation would be light tubes and LED strips placed on the floor or along the interior contours of the venue.

Whatever your light installation is, it’s best to place it just above eye level for a larger, more dramatic effect. Don’t forget about appropriate music and other special effects – only then your light performance will be harmonious and complete. Installations can be a great backdrop for a show or an addition to any art event – after all, only your own imagination can restrain you in creating them.

How to choose a projector for painting on walls

Painting walls has recently become quite a fashionable trend, it is understandable because the walls, decorated with paintings, look attractive and unusual. Such work is performed by artists with varying levels of professionalism. Projectors are used to facilitate the transfer of the sketch on a large surface. Such devices greatly simplify the process of transferring the image, so the work itself is much faster.

The projector is a very handy tool for artists of all skill levels. For example, photorealistic artists traditionally used a projector to enlarge and transfer the image from their small photo to a large canvas. By the way, in addition to projectors, there is another method you can use to enlarge the image – the grid method, but about that in another article.

A projector for an artist

One of the most important indicators is that the projector should be wide-angle or as they also say – short-focus. That is, the projector is designed for short distances.

In terms of projection distance, projectors are divided into:

Also the wide angle projector is better than the standard one as the artist can block the image on the wall less often and thus creates less shadow of himself!

The next indicator is the projector resolution

But you should consider that the higher the resolution of the projector, the more it will cost.

How many lumens is enough for a projector?

Since the work on the painting is carried out mainly in the daytime, the ideal number of lumens should be 3000. But again, remember, the brighter the projector, the more powerful his lamp, which requires a more advanced cooling system – the more expensive projector.

Now we have talked about brightness and we will consider another important factor which is the contrast of the projector.

The contrast of a projector is the ratio of its maximum white brightness to its minimum black brightness.  In other words, it is the projector’s ability to produce deep blacks. When contrast is low, black looks like a dark gray color.

So not to go too far into the thick of things, let’s say that for comfortable work the contrast must be 10000:1.

And another thing … When choosing a projector for wall painting you can not pay attention to one important point – the ability to read from a flash drive. After all, every time you have to carry a laptop it is very inconvenient.